Please find your local language below…

Founded in 1990, the Applied Research Institute – Jerusalem (ARIJ) / Society is a non-profit organization dedicated to promoting sustainable development in the occupied Palestinian territory and the self-reliance of the Palestinian people through greater control over their natural resources. ARIJ works specifically to augment the local stock of scientific and technical knowledge and to introduce and devise more efficient methods of resource utilization and conservation, improved practices, and appropriate technology.

The BFS department investigates the Palestinian biological diversity and its relations with natural resources and ecosystems’ balance. The status of major plant, animal, marine resources, pressures on biodiversity, as well as, biodiversity sustainable development indicators, are all areas investigated towards understanding and improving the sector at country level. The department investigates the drivers and causes behind alteration of ecosystems and their associated species (both natural and human induced factors); in addition to the effect of climatic change and drought on the vegetation cover and its landscapes, as an attempt to understand the causes behind desertification in oPt. These studies include compiling an inventory of Palestinian forests, through which forests are surveyed for their biotic and abiotic characteristics. All bio-informatics are collected in special database system and linked to the geographical information system, and remote sensing technology at ARIJ. In addition to a building herbarium and updated flora calendar. The department also develop adequate legislative framework for sustainable biodiversity and agro-biodiversity management in partnership with National Authority.

ARIJ has also long experience with citizens’ participation approaches, where most of its implemented projects take into consideration the participatory approach during all project stages through planning, execution and ending of the project. The selection methods used are well developed by specialists, where targeted communities are usually selected based on criteria set in relevance to project objectives. The recruitment method takes into consideration reaching the community through its main representatives, working organization and cooperatives, where several meetings are accomplished to introduce the project objectives, action and necessary results. PRAs (Participatory Rural Appraisals) are always used to join the locals and gather their feedbacks. Incentives are always used to encourage the locals to cooperate and get involved fully in the activities. The locals’ ideas and suggestions are always taken into consideration all over the project period. ARIJ twenty years of experience and work with locals has given it a remarkable reputation among the local communities all over the oPt, (mainly in the West Bank territory). ARIJ has a broad list of contacts and network all over the country, which makes citizens engagement in any upcoming work a feasible job.


Photos from the meeting in the Palestinian Territory on Flickr

To get in contact with potential Palestinian participants, the following strategy was used:

Of each governorate all types of localities were selected (urban, rural, and camps). According one locality per type was selected according to ARIJ experience with citizen participation processes.

The head of each locality was contacted and met, where an announcement sheet about the project was distributed and explained. The needed citizens’ criteria and number of needed citizens (4 per type of locality) were carefully explained for each head of locality. The translated enrollment form was also distributed to head of each locality so as to fill it with citizens. Another meeting was done with head of localities for collecting and verifying the enrollment forms.

Then a database was established where applied citizens’ information was filled into.

The data base was carefully revised and a set of 121 citizens were selected for final invitation.

The staff re-met the head of localities having with them envelopes; for each citizen an envelope including Event agenda, project announcement, translated information material, and official invitation with his/her name on. The head of localities were asked to confirm the attendance within three days.

Two days before the event each participant was contacted through phone and confirmed his/her attendance.

In order to make the results comparable, the participating citizens of the WWViews meeting around the world were selected according to the same set of criteria.

The citizens were invited to join the meeting and out of those who signed up for the event, about 121 were selected according to certain parameters aiming to reflect the distribution of the general population.

Concerning the selection criteria, it was divided as following:

Almost one third of participants were accommodated in Ramallah before one night of the event (14/9/2012).

In some cases a man and his wife/ a girl with her dad or brother were invited since this way was easier and more practical to ensure females’ attendance in the event. 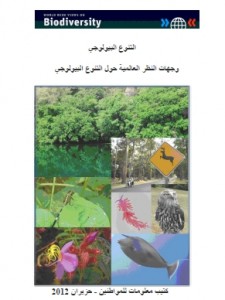