The WWViews method is driven by the wish to engage citizens in debates about important, but often complex, issues with the aim of giving advice to politicians.

The design of WWViews on Biodiversity is based on the experiences gained through a similar project, the WWViews on Global Warming in 2009 where 4000 citizens from 38 countries participated.
The WWViews method is a hybrid based on several decades of innovation by the Danish Board of Technology, and by other WWViews Alliance members, in engaging citizens in political decision-making processes. The WWViews method provides respondents with balanced and scientifically based information, as well as an opportunity to deliberate for a full day with other citizens prior to rendering their judgments. It thus allows for detailed questions and well-considered responses.

The core of the method are citizens meetings with a 100 participating citizens each held in all participating countries. As non-specialists, citizens are in a unique position to weigh the pros and cons of different technological and political initiatives and to evaluate scientific progress from moral, social and cultural perspectives. Unlike opinion polls, the WWViews method provides respondents with balanced and scientifically based information, as well as an opportunity to deliberate for a full day with other citizens prior to rendering their judgments. It thus allows for more detailed questions and well-considered responses.

To learn how citizens view biodiversity, citizen consultations are arranged in 25 countries with 34 meetings worldwide on the same day. Participating citizens are lay people, chosen to reflect the demographic diversity within their country, with regards to age, gender, occupation, education, and geographical zone of residency (i.e. city and countryside) and membership of environmental organization. At least 100 citizens will participate per country. When 100 people chosen in each country reflect the composition of the population according to the parameters listed above, the results will give a credible snap shot of the views of the population in a country or region in general.
The citizens can be recruited in a number of different ways; by sending personal letters, face-to-face recruitment based on quotas in geographical clusters, recruitment by telephone, advertising in different media or the snowball-sampling where three invited persons are asked to give invitations to three people they know, who will then do the same.

The agenda of the meetings

Many of meetings were either opened or closed by a minister, COP11 negotiators or other government officials. The citizens learned about biodiversity issues (both in advance and on that day) from information material, discussed and voted on a set of predefined questions. It was the participating partners’ responsibility to translate this material into their respective language. In order to gain comparable results, during the WWViews meetings, it was important that participating citizens were introduced only to the common WWViews information material. There were four thematic sessions with the possibility of an optional fifth on a national or local issue. Each thematic session closed with the citizens casting their votes anonymously on two to four questions. The votes were counted first at the tables, then by the staff and were instantly reported to a website, where they could be compared across age groups, countries, regions and continents as they were produced. 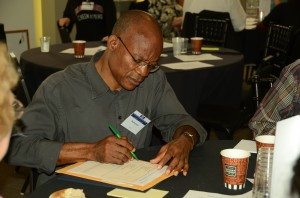 The results were analyzed and communicated in a policy report and a short documentary video about the process and results. Both were presented at COP11, thus providing a unique support for and input to the parties. By pointing out concerns and priorities central to the public understanding of biodiversity, the result can inform future policy initiatives. Furthermore, by examining public awareness of biodiversity, the results will also form an important baseline for future awareness raising initiatives.
Find the results from all citizen meetings here.

Events of the day